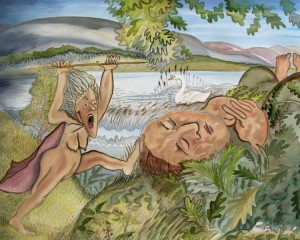 Background – on reading the satirical Aisling poem “The Midnight Court” by Brian Merriman, I thought how I would fare if so summonsed, being a bachelor over 30 and never being known as a Casanova!

Lest a man fall foul of the Midnight Court,
Let him watch where we walks, not by Fairy Fort
Let him the wailings of maidens beware,
Let him ignore her bidding to follow here where
Her desires on him can be released
Lest they not be the kind that could anger a priest
For being the temptress, looking so fair
May turn out to be the Caoileach who will lead him there
To be put on trial, be judged and condemned
By the women of Ireland, who flay him to the end
Of his life – and a horrid as such may seem
The true horror is that he may not wake, this not being a dream!
Oh I the bard,would find it hard to prove my worth
Should I be summoned before the midnight Court!