There are epic tales of Greece, of Scythia, of Rome
Of China, romances and heros out there
But few had the life of chance, adventure, romance
As Paddy Connel, a stranger from Clare…
From wandering roads of Munster to being courted by kings
He first was to survive vengful soldiers running amock
Killing rebels defeated, the rebellion now ended
On the boggy drumlins and plains of Ballinamuck
He lay on the field, played as if among the dead
Who perished at the battle that day
A man from Clare with a knack of survival
Who for his life did silently pray.
Poor Blake was dead, Magee strung from a cart:
The survivors marched to Ballinalee to be hung!
Robin Gill survived, fought on, and thrived
Of him today poems recited, songs sung.
Yet a stranger future lay ahead for the stranger from Clare
Who was pressed ganged into the ranks of Red Coats
Turning at Castlebar, here he lay to escape
Set to cross wild wide waters in wilder boats!

Times were hard, how hard, who his people are the papers don’t tell
Bar for loitering in Clare he was press ganged
He turned his coat at the Races of Castlebar
Ended up at Ballinamuck where Gunner McGee some say was hanged.
Such is the brief back story of the Man from Clare
Much greater men were not to have such varied or forgotten lives
To end there days on a tropical isle
With not one, but eight exotic wives!

When darkness had fallen and cloaked the land
The dead littered like sheep it was side the landscape
Our hero came to life, the soldiers mostly been gone,
He quickly made his escape.
His luck was not to last – he was captured in time
Got thrown into Fort William Jail
But even in misfortune our Paddy found Lady Luck
Her favoured son she did not fail.

Fort William jail with cockroaches was overrun
– As is often the case in these sort of places –
Our hero declared himself a bookmaker to be:
Setting up cockroaches as if horses in races.
It was not to last, it was good when it did!
Someone told the jailor, – prehaps for revenge for wagers lost was set?
He had in his new cell the cockroaches as well:
But being alone there was no one upon them to bet!

In time the For William jail from the troubles was filled
So even the jailors thought it unsafe and too full:
Being the least of the offenders our hero was moved:
To be cast into a Lee floating prison ships hull…
As the boat bobbed up and down, a sensations so strange
Which he had probably never experienced before:
Little did he know in the years that were to come
He would experience those motions many many times more!

Lady Luck who on him smiled on often, was the loser
In battle with her cousin known as Fate:
A prison ship floated in to the Port of Cork
Its captain turned up to the jail gate:
He was looking for cargo to fill his ships
Heading to Australia far far from there
Never again was Paddy Connel to see
His native childhood fields of Clare!
His pleas that he was not for transportation fell on deaf ears
To the bowels of the ships he was flung
High above the deck in the wicked ocean winds
Flapping voilently the sails they were hung!

In time as time does, she ship it arrived
The names of the passengers were read out
Connel was extra – no one knew why –
That he was sent in the wrong, Connel did shout!
Now Connel was no good to have in a jail
Was too annoying to around all to be
So with a bee in his ear, in a land far away
To fate and the four winds was set free.

Old habits by hard, and on Sydneys streets
For fighting and being hard a name was soon made
Facing everyday the extremes of boredom and immident death
Not too many of much were afraid.
A Frenchman – Satori by name – arrived in the town
Talking of a distant exotic land called Fiji
Where he had a ship whose crew were mostly dead:
He wanted crew – Connel stepped up said: “Take me!”

His destiny set when his eyes they met
The “General Wellesley” in Fiji’s Sandlewood Bay
He said it was not fit to float in a puddle
So Satori said that on the island he must stay.
In an isle of cannibals one would think it a fate of death
But Lady Luck was winning her battle with Fate
The luck of the Irish was with Connel as well…
To capitalise on fleeting luck was his trait! 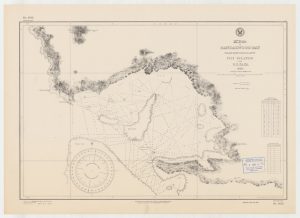 King Tambaivalu needed a white man
To balance the power of Charles Savages ally
Our Paddy stepped up, and quickly was hired:
Great luck, as many whites were eaten when they did die!
Fate in its battles with Lady Luck gave up the ghost
Victory on Paddys king followed close behind
A “Ratu” or prince with eight wived he was soon made
Ballinamuck and Clare long gone from his mind…

Now, Paddy was a braggart, but met his match
When of his siblings of ten he did tell –
He was mocked by the cheifs who had more by a wife:
As much more by each other wife as well.
Now Paddy had eight wives, and he set to make
A family of fifty at least to leave behind…
Thats why many folks family trees in the County of Clare
Distant cousins in Fiji can find!

But Fate rallied against Luck, and aided by fortune
The king died, replaced by his son
They did not get on, a piracy shipwrecking went wrong,
The descent of Connels star had begun.
But Lady Luck faintly smiled, Paddy was exiled
With his collection of skulls, his kids and eight wives:
He was lucky in misfortune and normally such a man
And his family would lose their lives!

Paddy was to die a bitter failed man
For while he had living children a mere forty eight
His aim of fifty had eluded the stranger from Clare…
The winner of the war of the Gods it was Fate.
There he was buried, far far from the men
Among who he lay claiming to be dead in Ballinamuck back there
In distant Ireland he never more did see
Being far far from his own native Clare!