The issue of public funding for the arts, in a time of austerity, has been a hot topic in the bars and hair salons and outside the church gates and also online of forums and social media for a long time now.

My own take on the issue, is that to achieve public funding, an artist, be they working in the written word or film such as I, or in sculpting etc.,, an artist has to compromise on the purity of the message that they wish to convey through the arts.

Some cannot take part in boycotts of punitive taxation, such as water charges, due to the fact they wont get paid if their taxes are not up to date. More cannot express freely what they want on certain issues due to the fact they may not get contracts renewed, or festivals funded, or similar.

Myself, I refuse to apply – not assuming Id get funding anyway, for such, as it would stop me being as open as I am, whether people like my opinions or not, on such issues as the pro life issue, the penal policies of austerity, the false politics of opposing windmills, or the punitive over regulation of the horse trade and fairs, as to do so would stop me being an artist of a free spirit. While love poetry, and nature poems are lovely in their own place, they do not make the spirit of a poet.

And some hold to keep funding as its keeps the bread and butter flowing in their direction, and they portray it as being in the public interest, when it is in their own.

And the politicians who jump on the bandwagon are as bad, as a soundbite for better services due to austerity looks good in the press, at the expense of a service that costs only 1% of the projects cost, and so only offers the same of its return to the taxpayer.

One such issue was was it worth the money spent on the sculpture of the fiddle on the Longford bypass, when a town like that could have so much more better servies given to it, even if the €60,000 odd was given to a FÁS (or whoever runs those courses now!) scheme for unknown artists to make a series of works for the same money, as opposed to it being all wasted on one piece. The poem I wrote on it, advocating that artists should work for the love of art, as opposed to earning a living from it, gained a mixed response, some heartfelt, and more was artists covering their own arses!

The poet / writer if you will Kevin Higgins of Galway writes on the topic on his blog. Him and I have taken opposing sides on issues before, most notoriously on the pro life / pro choice issue, but in this piece he quotes a Labour politician who picks on the arts as a waste in times if austerity, and invites her to debate it. Id go farther: if it wasnt for their (FG & Labour) policies, there would be little need for such cutbacks, and THATS the point Id like to debate. But even for the challenge Higgins makes, it will be interesting to see how and if she replies.

Its not just me our freind Higgins has clashed with in the past, having a long running writers fued with the Western Writers Centre’s Fred Johnstone over a dispute when the latter was running a course for the aforementioned FÁS, which is a long and sorry story in itself. Amid fistfights with some Galway Alliance Against War (yes, the peaceniks had a fistfight, fight for peace!!!) personnel, myself, Johnstone and now a Labour councillor, Mr Higgins sure knows how to run folk up the wrong way, which seems to be his aim, being something of a satirist of all who dont agree with his twist on the topic of the moment. But enough about all that, back to the issue in hand…

Cynics would say Higgins, who in the post writes an open letter to her stating his vested interest in the issue is the fact he has been Writer-in-Residence with Galway University Hospitals Arts Trust since 2007, and extols the benefits of such schemes from first hand experience teaching  and administering them, is in the artists looking after their own arse’s camp.  The fact – as I understand it – that he gets paid for the post leaves him open to such accusations, as if he was doing it without financial reward, he could speak from a neutral standpoint, and indeed the high moral ground, as he would have little to gain bar a bonus to public profile. 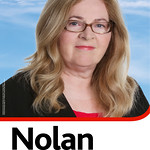 Nuala Nolan, the former member for Labour of Galway City Council, I would cynically say, and I may be doing her a disservice, is just barking soundbites. It would be more in her line to shout against austerity, and fight for the interests of the people who vote for the council than turning a blind eye to bailout for banks while mortgagees lose their houses across the country, including in Galway, where it shows the issue by the rapidly growing housing waiting list from such cases, and the Soup Kitchens in operation in the city.