There came a man who spoke from a book
And spoke of better ways
Of Heaven and Hell and Judgement
Faced by man at the End of Days.
Spoke of our salvation 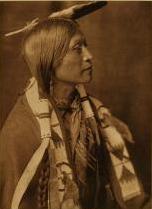 Bid us his church to come within
Surrender ourselves to the white mans God
And save ourselves from sin.
The man spoke from the book
That to us he did bring
Spoke to say he’d teach us all
But he thought us nothing.
On prairies wide in olden days
When the Red Man met each other
Once not enemies they found themselves
They automatically were as brother.
They took from the earth what they did want
Enough buffalo their families to feed
Enough wood and stone for arrows for to make
None extra through greed.
Each mans woman was his own
Not for another to take
And woe be to the Brave that was stupid
Someones woman as his to make.
The white man reads from his book
A better way for us to show
From what I see there is to be
Nothing the Red Man does not know.