ghost tale from Tullamore retold in verse, first told by Walter Burke, former leasee of the bar in the Tullamore Dew Heritage Centre. There are many tales of tragic deaths in the building when it was a distillery and a bottling plant, and we can be sure with alcohol added and tales being exchanged at 3:00 in the morning no details were left out if none added in! 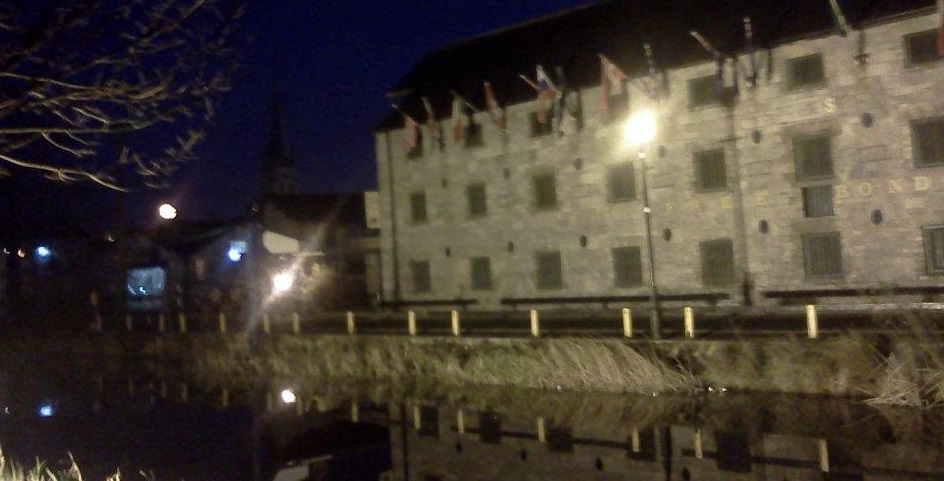 Washing the dirty glasses, all the customers were gone
Finishing up for the night—no, there is still one
Elderly gentleman, who at the counter he sit
No Gardai checking after hours, we’ll let him stay a bit.
No harm he’s doing , the barman employs
Himself to cleaning and tidying, as the old man enjoys
The fruits of a lifes hardship, a last drink at the bar
The barman doesn’t know him, if he’s from near or far
All doors locked: checked, at the bar the drinker dozes
His checks complete, the windows the barman closes
Drunkard wakes and wraps the counter, and asks for one last drink
“I’ll be with you in a minute”: one wont hurt the barman does think.
And as he turns with the glasses, his very soul chills
He shakes in his standing, the drink nearly falls & spills
For sure as he was standing, sure as solid was the floor
The old man who ordered the drink was on his stool no more!
There was no footsteps no exit, no possible way out
There was no-one to be found, the barman looked about
Of apparition from the spirit world, he’d be as skeptical as most
But that night, the barman had the sight of the Old Bond Store Ghost.