We all have a British soldier from WWI in the family. Only now can we recognise them. This is dedicated to them. Part of the “Letter to an Unknown Soldier” project. 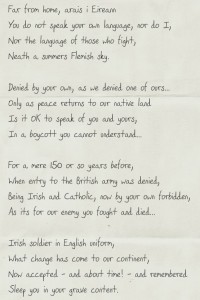 Far from home, arais i Eireann
You do not speak your own language, nor do I,
Nor the language of those who fight,
Neath a summers Flemish sky.

Denied by your own, as we denied one of ours…
Only as peace returns to our native land
Is it OK to speak of you and yours,
In a boycott you cannot understand…

For a mere 150 or so years before,
When entry to the British army was denied,
Being Irish and Catholic, now by your own forbidden,
As its for our enemy you fought and died…

Irish soldier in English uniform,
What change has come to our continent,
Now accepted – and about time! – and remembered
Sleep you in your grave content.