As cameras panned out on the Tullamore Rhymers taking a bow after a reading for the opening of The Fureys in Tullamore, I reflected on an intense weekend as James Delaney collated material for a promotion video to be sent into Glastonbury for their spoken word section, and for the broader documentary that he his doing for his film course in Galway Community College.

A lot goes into filming – its not just a case of point the camera and press record. From getting the light right to the sound levels at an acceptable level, the filming of each of us doing a few pieces and a small “talk to camera” section took up the full mornings of last Saturday and Sunday.

The Tullamore Rhymers now have a YouTube and Vimeo presence where footage from the weekend and outtakes and live readings from the gigs wil be published over the coming weeks.

I read “Out of Tune” in Charleville Castle, a timely piece given the piano that I was sitting beside.

I also recorded and interview of the experience I had as a founder member of the club, what poetry means to me, and the history of and the future of Spoken Word poetry in particular, and rhyming poetry in general.

A little known fact of Spoken Word poetry, which in its current form started in Chicago in the 1960’s, was the improvised recitation of mocking and lighthearted insulting poetry practiced by the Scots Irish in the Appachalins which they called “flyting”, which is – though more closer to olden poetry than rap or spoken word – of a similar state and retort style dissing each other as the rap battles and the broader spoken word scene can be.

Rap battles are not a major feature in the Irish Spoken Word scene, as much as they can be in America, but the spoken word contests here can be just as competitive if not as intense.

Its an old Norse tradition, which was still practiced by the Scots Irish in the 19th century, and is a direct precursor to the rap battle in particular, and to spoken word in general, where it is fused with the African American poetry styles.

Of course, my style is the more traditional folk poetry style, as exemplified in the poem I read at the beginning of our filming in Joe Lees beer garden where I read “Life Is but a Chess Game”

Camillus Boland read some of his pieces, before we headed for Charleville, and the best laid plans of mice and men come to naught as we got scattered and fell behind schedule. While waiting for our comrades in verse, myself and Camillus discussed works we were working on, and one of the pieces that I was thinking of reading – but after didnt was one of the poems on unrequited love “My Heart Will Not Keep Her Warm“.

After that false start we headed back to town and rallied the troops and eventually made it en masse back to Charleville where the recordings of the verses and interviews commenced and per plan. As Coramc Lally was being interviewed, it was my job as the Human Doorstop to keep the doors closed to stop outside noises coming in!

That night, we headed for Giltraps in Kinnitty. This small country pub in the mountain village on the Sliabh Bloom mountains is a must visit if ever you are in the area, and the nights entertainment was unannounced. Richard Brennan was the MC for the night, and in his usual freindly style, he got the audiences attention, and the nights reading began.

Cormac Lally, the poet of protest he is, got a good reception for his poem “Bull” considering the pub is owned by a local Fine Gael councilor, with one saying “he’s one of them radicals, but a lot of what he says is true”, David Mallaghan stirried it up with “Irish Soldier Minding Cash Van” before getting a great reception for “Bridge House Carvery Dinner”. I read “Give to Me an Angry Sea” and “Saved by the Buttonhole“, the story of Peter Drake who fought for France being saved by General John Drake who interceded with the king due to the two families being of the one line.

Also reading was Camillus Boland, whose poems on Offaly hurling went down well, and James Delaney, a village native whose readings were well received. But it was the funny poems that went down the best with a noisy crowd, and we headed back for Tullamore to get some rest for the following days filming, happy with what we had achieved with a non poetry oriented crowd in a country pub, and I think we changed peoples perception of poetry from being a stuffy pastime, to being accessible to all, and something that actually can be quite fun, not by preaching, but by actually being so ourselves, some ordinary guys with a passion for our art, sharing it with the wider world.

The following morning, as per usual Carty slept it out, and only caught up with the crew at The Bridge House as they got in interviews and filmed readings from members not present the preceding day. The build up to the opening for The Fureys was fully on, and though the spec was for one piece alone each – we were doing our usual revolver routine – it had to be dead on, so I decided to do “Out of Tune” here as well, as it was relevent to the area, Shannon Harbour being near Tullamore, and the whole county knowing the Canal Bar where the broken piano was that inspired the verse, as opposed to reading “Walking By Swans at Lough Sallagh” as I was thinking of doing.

During the build up to the event, while recording readings in a side room, we had the pleasure of watching the filming of George Furey’s interview,and after the chance to chat to him, a legend of an artist, who gave us advice as writers, and as a club, how he could see ourselves as artists and as a club progressing, with a strong focus on the folk, and the folk club circuit.

We arrived back at the venue that night all ready for what was to be one of the most important fifteen odd minutes the club was going to do. Though only one verse a piece, the whole getting on stage, getting across stage, and exiting stage had to be worked out, as it was scattered with cables and was a navigation nightmare if you dont watch what you are doing you could be entertaining the crowd in a way you did not intend, they would not forget and that you wish you could.

Again, this time, there was the film factor, to get the effect running as smooth as possible for the cameras as the shot had to suit the lighting and no supplementary could be put into a live reading as this was not our gig, but another artists gig we were opening. 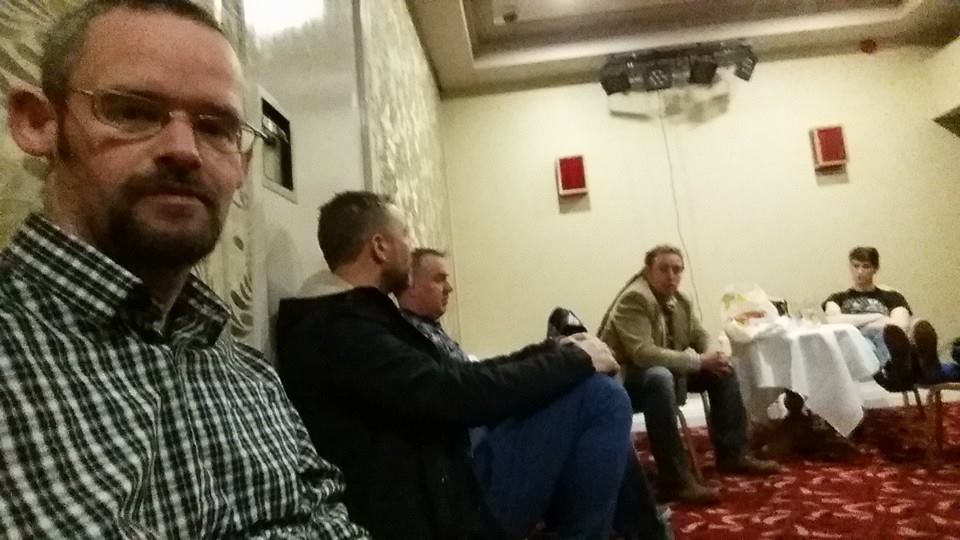 Having all the finer details worked out, we sat backstage, chatted and waited. Soon enough, it was curtain up, cameras and action, walk offstage to the right, before being called out by Cormac Lally, introduced by name, and taking the bow I think we all deserved after what was a long weekend, which will bear fruit in the documentary that James Delaney is producing.

Then, the real artists took to the stage, and I had to wonder at these artists who were famous when I was a child, had me and my freinds in the Tullamore Rhymers Club opening for them in our home town, such as Tullamore is for the club, if not for all its members!

I stayed on for the first part of the show, and then joined James and his friends for a nice relaxing beer before heading out into the night, where an exiting and surreal weekend was drawing to a close…